I thought I’d give you a break from the general seriousness of my newsletters this fortnight!
After all, we DO have a lot of FUN at Heartland!
So…….below is a story from Trudi about our latest family members – three baby cows we’ve saved from slaughter.

Quick reminder: Easter is next week and we have 2 private rooms still available for our Spiritual Program.
4 days just $495 all inclusive. Fantastic value and sure to be one of the most spiritually transformative programs we’ve ever offered at Heartland. So if you’re ready to own your REAL Self and enjoy greater empowerment (as well as mix with a great group of spiritually awakening friends!) think about joining us!

I thought it sounded like a good idea at the time.

We heard about a program called “Save a cow” which is a local adoption system  for young male calves who were born in dairy farms and lack the appropriate appendages for any long term security status on the farm.

Since we have 80 acres, our need of them is as high as the grass around us.

A couple of weeks ago three “free” calves came into our care.

So far it reminds me of the “free kitten” sign at the local markets – the one that I have walked past many times smugly saying “Yeah, right, FREE!” But not having experienced “free” cows before, we were totally ignorant about anything and everything  – and whilst ignorance may well be bliss, our lack of awareness was as obvious as teets on a bull.

After a few trips into town and some $600 later we were armed with powdered milk, calf muesli (who would have thought!) chaff , oats, nursing bottles, teets, straw for bedding, tick and wash sprays, organic yoghurt (nothing but the best) tick and worm crème and of course, bins to put everything in.

We unloaded the heap, cooled off the credit card  and began our new journey into the unknown world of cow care. 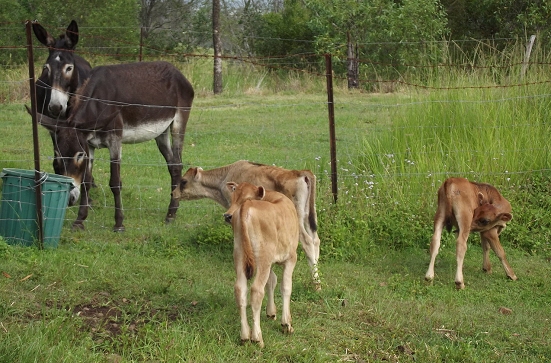 Our helpful but somewhat bemused local feed-barn shop keeper, seemed to revel in our ignorance and smile at our blatant unknowingness.

He seemed to know intuitively what my plan of action would be and shattered it in one foul swoop when he said  “don’t think that you can go into the pen with a bottle of milk and say “here cowie, cowie,” and they will simply come up & suck!” Oh dear, I thought (silently) – now we are in trouble!

“Oh?” I said, having a significant “blonde moment” and trying not to let on.

I didn’t need to look stupid because I’m pretty sure he thought I was.

I guess all was revealed when he asked “what kind of cows do you have?” and I answered “the four legged variety”. I don’t think that’s exactly what he meant.

He took a deep breath. I did likewise.

“When you go to feed them, you’ll have to grab ‘em, straddle them, put your fingers in their mouths (they have big teeth even at 3 weeks old – something else we have learnt!), shove the teet in and squeeze it a few times so they get the taste of the milk, then you’ll be right”.

Mmmm that sounded easy, but life is never quite as easy as you think, is it?

And so began our journey into calf raising…..

With three of us and three of them the odds were probably not in our favour but as ignorance is bliss (still) we had big smiles and welcoming calls to our new brood.

I didn’t say “here cowie, cowie, cowie” (the man had taken that away from me), but I mooed just like their mother (I think) and I was hopeful of a connection between us.

They had after all, landed in cow paradise, they just didn’t know it yet!

We managed to corner one and in its fright it let go of its bowels onto my legs (memo to self; wear long pants next time), he then trod on my foot (another memo to self; wear gum boots not thongs), and Les proceeded to straddle him while we jostled and pulled and grabbed and tried to hang on to him, rather like the cattle rustlers in a bad western movie.

Mind you the little fella was only 3 weeks old – and we – in cow years – must be… well ancient. After many, many attempts and a few choice words from yours truly, I ended up on top of him and he took off with me hanging on. The bucking bronco tried to escape my clutches but I held fast while Les and our son Nicholas calmed him down (and I calmed myself down) and I thought all this to put food in their bellies – and this was only the first calf!

Phew….. We had just landed in a crash course of calf crushing. “Ride em cowboy” I thought to myself, already exhausted.

“We have to do this twice a day?” Nicholas asked. Yep.

We sort-of managed to get half of the milk in each of them, both cows and humans exhausted by the mighty effort, and while the milk settled them, we went to have a drink to settle us down for the night too.

Sometime during that first night, I said to Les “I thought they said the calves were too young to moo?” But the strange sound reverberating in our bedroom sure sounded like moo-ing. The noise started up almost continuously from about 5am onwards until we all went back for the next exciting instalment of feed time.

Let’s hope they and we, get the hang of it soon!

PS Nicholas’s favourite joke is “what do cows like to watch?” Moooovies.

Where do they go when they die? The moooon.

And my favourite… “what do cows like to listen to?” Moooosic!

Number of items in cart: 0